If you have come to us to further your career goals, transfer to a four-year institution or simply to enjoy our campus and the many events and programs that we routinely share with our friends in the community, we are happy to have you with us.

Since we first opened our doors in 1967, Moorpark College has been dedicated to a mission that embraces social justice, diversity, equity and inclusion and you will see those values integrated in all we do on our campus.  Our students come from a diverse range of backgrounds, ethnicities, and ages and it is our charge to assist you in discovering your passions as you pursue your academic and career goals.

As one of three colleges in the Ventura County Community College District, we work hard to meet the educational and cultural needs of our student community and the community as a whole.

Moorpark College has been widely recognized by multiple state and national organizations for its commitment to excellence and affordable costs. We offer a rich and vibrant campus experience, as well as providing online and hybrid classroom environments to accommodate the needs of all of our students in these ever-changing times.  And, if you should be looking for on-campus engagement, we also have many student clubs and events to enrich your community college experience.

I have no doubt that you will find that Moorpark College students are primed for success.  This can be attributed to the foundation laid by our institution’s founders and the ongoing efforts of our campus team. When you attend our college, you are joining the ranks of more than 50 years of highly successful students that have in transferred to four-year institutions, transitioned into exciting new careers, and who are now engaged in life and work in our communities.

I look forward having you as a Moorpark College Raider and seeing you achieve success in your educational goals. 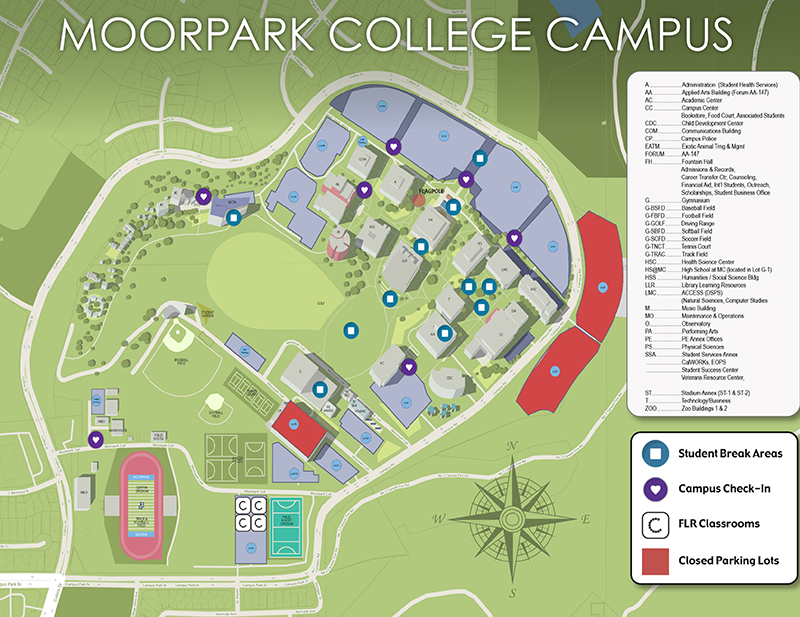 We are Moorpark College!

The Moorpark College campus we know today is thanks to the Governing Board of the Ventura County Community College District and the Strathearns, a local ranching family. After the Board established the College in 1963, a 134-acre site on Moorpark's eastern city boundary was secured in a combination donation/purchase from the Strathearns.

Enrollment doubled in the first few years as the College added career technical education to its role of preparing students for transfer to four-year colleges.

In 1974, the Exotic Animal Training and Management program launched. The college’s America’s Teaching Zoo is still the only associate degree exotic animal training program in the country.

The Moorpark College Foundation was formed in 1980 to spearhead construction of an athletic stadium, amphitheater and observatory. In 1985, the 4,000-seat stadium was named for Paul Griffin, Jr., a local developer and major benefactor. The Carlsberg Amphitheater and Charles Temple Observatory were dedicated in 1987 as part of the College's 20th anniversary celebration. In 1989, the Center for Learning Assistance Services opened. The 1980s saw the completion of several more buildings, including Applied Arts, Creative Arts, Humanities/Social Science, Music, and Student Services.

Fiscal constraint, brought about by the state's economic downturn, stalled growth at the College in the early 1990s. Despite hard times, the College completed state-funded construction of the Communications Building in 1991 and the Performing Arts Center in 1995. The forensics team maintained national ranking while the athletic teams continued to dominate the Western State Conference.

In 1997, the Child Development Center and Disabled Students Center were expanded.

In 1998, two new conference rooms were built in the Campus Center and an acoustic shell was installed on the Main Stage of the Performing Arts Center.

In 1999, the Instructional Biotechnology Program opened an 8,000-square-foot bio-manufacturing facility on the California State University at Channel Islands campus and The Moorpark Review, a student creative arts journal, debuted with original student writing and photography. Also in 1999, students were first able to access their academic records and register for classes online.

A high school for high-potential juniors and seniors opened in 2000 on the Moorpark College campus. In 2001, 55 students in the inaugural class from the High School at Moorpark College graduated.

In March 2002, Ventura County voters passed Measure S, a bond that provided $356 million in construction financing for the Ventura County Community College District, of which $104 million was used to renovate/expand Moorpark College with new or renovated classroom buildings and related facilities, including building the Library and Learning Resources Center.

In 2004 the college’s first bond project was completed, a parking lot renovation that added 600 spaces.

In 2005, the second bond project was completed, the installation of an all-weather track and artificial turf playing field. In September 2005, the new Library/ Learning Resources building opened.

In 2007, the college saw the opening of a new child development center and the beginning of an endangered butterfly species captive rearing program at America’s Teaching Zoo. (The Palos Verdes blue butterfly’s primary rearing site is in San Pedro on government land.)

Also in 2007, the old library was renovated, renamed Fountain Hall, and opened for classes.

In 2008 construction began on the Health Sciences Center, the Academic Center, and the Exotic Animal Training and Management (EATM) Building.

On September 11, 2017, Moorpark College celebrated its 50th Anniversary. The campus remembered the 9/11 tragedy and held a special anniversary celebration with events that included the inauguration of the Moorpark College makerspace, an area devoted to hands-on learning, and grand opening of the student art gallery, located in the Applied Arts Building.

In 2020, the College completed $18 million renovation of the Raider Sports Pavilion. This project marked the first significant renovation since the gymnasium was constructed in 1967.

Through the decades, Moorpark College has earned a reputation for quality and innovative programs that prepare students for a rewarding career or to transfer to a four-year university. Our alums have made meaningful contributions to both the public and private sectors in Ventura County, the state and the nation.

The Moorpark College policies are available in the Academic Policies and Standards section of the college catalog.